Up until now I have only put the reviews I’ve done for Rosie’s Book Review Team on my blog, I’m not sure why it’s just been what’s happened, but I’ve read so many terrific books since becoming part of this indie publishing world that I thought I would share more of them with you.

I do not accept books for review however, I review as a reader and due to my huge to-be-read list I triage first as I don’t have the time to plough through something that I’m finding a struggle, for whatever reason. So here I will share with you those I have really enjoyed.

I will go back to older reviews and add those in time but for the moment here is the first! 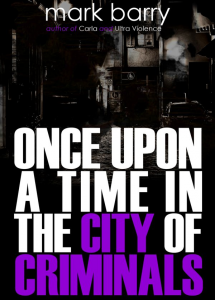 Once Upon A Time In The City Of Criminals

This is not the first Mark Barry book I have read and it definitely won’t be the last. My preferred way to read his books is to shut off the outside world and sit curled up comfortably as I breathlessly devour the book in one sitting. Sadly I don’t have the luxury of that amount of free time at the moment and whilst perhaps I should have saved this to indulge in when I went on holiday there was no way that was going to happen. I have been waiting for this and waiting any longer was not an option.

This book is bare bones no nonsense writing at its finest, written from the point of view of Terry Valentine – Loser, Jailbird, Hooligan, 50 year old crackhead but most importantly Protector. The one he protects is the alluringly beautiful Chloe, fun, loving and young but who works as a lesbian prostitute, and is cool, classy and sophisticated when she does so. I loved the conversations between Terry and Chloe when he’s driving her to her tricks, there’s an unspoken rapport between them. He speaks to her with reverence because he worships her, and despite himself falls in love with her.

But he’s not the only one. Hope Calder, one of Chloe’s clients, falls in love with her too and being the rich CEO of a huge company is used to getting her own way. No is never an option and she’s surrounded with those who are there to make sure she gets what she wants. When Chloe goes missing Terry enlists the help of his friend, Francis Pike, to go and get her…and they start with her pimp, Neville, an old enemy.

The banter between Terry and his mate Pike is brilliantly sharp, made up of the small time crime stuff that works so well in British gangster films. The fact that they’re driving around in a dirty pink Fiesta conjures up the image immediately.

‘Pike walks straight in without knocking. Surprise, surprise, he’s had the same idea as me, in a crimson Adidas tracksuit and gold striped Adidas Forest Hills. He’s wearing his Hackett cap. He smells like a tart’s knickers but I don’t place the brand. He’s a good three stone overweight and he should have thought about that before considering the tracksuit combo, but he’s a deceptively hard bastard and fast too – I’ve seen him in action. I feel like offering him a coat for modesty’s sake. He’s carrying a canvas holdall, which he plonks on my desk.’

Barry has this ability to have you laughing out loud one moment before tensing up the next and the twists of humour help to soften the violence, of which there is plenty. But I didn’t find it overly graphic.

But here’s the thing in amongst all the quick wit and aggression there’s the heart-breaking centre of this story and as I’ve found with Barry’s previous books it’s done perfectly. I wish I could say more but I can’t without giving away too much, and you don’t want that do you…not when you have the joy of reading this yourself in front of you. You lucky things…

Suffice to say that yet again Barry leaves me teary eyed and emotional. Terry has a list of descriptive words he uses about himself…they are all true…but I’d like to add the following – Loyal, Loving and Loved…