#Review for The Black Banner by Helen Hart @SilverWoodBooks 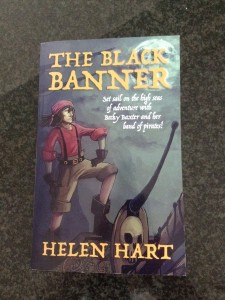 I bought The Black Banner a while ago now for my niece but accidently forgot to give it to her for her birthday mainly because when it arrived I wanted to read it myself. As it is aimed for the teen and young adult market though (a fact I didn’t appreciate at the time) I might just hang onto it for a couple of years as my niece is only ten.

This is the sort of story I would have luxuriated in as a young tomboy of a teen, when I had time to fill and can remember whole days where I’d shut myself away with a book, lost for hours and taken completely into another world. If only I’d appreciated that luxury at the time! This is one of those books that would have stayed with me, it has stayed with me now even though I’m a little over its target audience age.

This story is set in 1719, a time when pirates plagued the seas, preying on the merchant ships of the Caribbean. Becky Baxter leaves her drunken Ma and the evil Mr Crudder behind in Bristol, cuts her hair, and changes her dress for breeches before calling herself Billy and taking to the seas on the Bonny Marie. She is soon to come across pirates who sail under the black banner, which came before the more traditional skull and crossbones, and as entire crews are condemned to die beneath a cutlass blade unless they swear allegiance to the black banner what is to become of the crew she has sailed with so far?

“There was a moment of horror as the Portuguese sailor’s eyes bulged and I felt him go slack. He was down. Someone cheered nearby and gripped my shirt, propelling me on into the fray. Musket shot whistled past and chewed up the deck timbers. Cutlasses clashed and recoiled. My nostrils prickled with the stench of grenades and gunpowder. Reeling, I staggered up onto the quarterdeck of the Sao Silvestre just as the plea came for Quarter.

Rapturous shouts filtered up into the rigging. Scorching sun beat down on my head. I stood still in the midst of the cheering crowd and gazed at my hands. There was blood on my blade and up my wrist. But I’d had my first fight – and won!”

This tale is written as a series of diary entries in Becky’s journal which works very well. The writing is tight and graphic and the story is paced perfectly. Hart has done a very good job of depicting her characters and as so often happens in fiction we are drawn to the pirates, willing for them to survive…and not all of them do. If I was to be really, really picky there is one reveal which I wish could have been drawn out a little longer but that’s just a personal thing and took nothing away from the story. I don’t know that much about the history of this time but as this book was written in association with The Long John Silver Trust I feel confident in the authenticity of the details.

This is a terrific book for all those who like well written action and adventure with great characters and an emotionally realistic storyline.