Okay so hate is a pretty strong word for it but at one time that was how I felt. Not about the day, the reason for it, the sentiment. But the build up…the overwhelming and relentless build up that threatened to crush any joy out of the festivities.

It was when my children were small that my dislike for the entire Christmas season peaked, which seems a shame but like I say, the day itself was alright (although my favourite days have always been Christmas Eve and Boxing Day.) Watching the excitement grow in the children until it felt an almost palpable presence in the house was wonderful and none of that enjoyment was lost (even if it was experienced through a tidal wave of exhaustion that only well timed top-ups of mulled wine could dispel) it was just the dreaded acceleration towards the climax I couldn’t stand.

Mostly I blamed the school for the pressure and I have one particular example to share with you. When my children were at primary school our county was one of the worst funded areas. There was some reason for this but I haven’t retained the details and I have no idea if the situation is still the same. However the knock on effect was that money had to be raised to help support the school and there was an events schedule in place to do this…which felt to me like it peaked at Christmas because as well as everything else, there was the Christmas Fair.

Now all parents, and I guess anyone who was once a child, will be aware of the ‘letters home’ set up. Although at our secondary school, recently vacated by my son, this has been replaced by an email system which makes sense with over two thousand students. However at our primary school of less than 120 pupils the letters popped into rucksacks on the way out of the door was the way to go. It was a good system with most of the notes (at least those that hadn’t been left on the bus) making it even if they weren’t actually found until weeks later when the bag was eventually cleared out.

There was one particular letter that has stuck with me, even though it was over 15 years ago that it arrived, screwed up with a couple of others, and it nearly pushed me over the edge. I only wish I’d kept it to insert here, but hindsight is a wonderful thing.

This letter arrived towards the end of term and I remember the Christmas Fair was being held the following weekend. I was already exhausted with all the Christmas preparations, shopping, cooking, writing cards, wrapping and delivering presents for a huge family, sorting out the decorations…well you know how it goes. In those days, on top of running my own business it sucked the life from me and the surge of adrenaline as panic set in was what woke me each morning.

This letter was on red paper, I suppose it was meant to be festive…and it read…

Please don’t forget we need your donations of mince pies (preferably homemade) and items for the White Elephant Stall.

Friday has been declared a non-school uniform day in exchange for your child bringing in a gift/bottle for the Tombola (but please, no homemade wine this year – labelled or otherwise)

Homemade cakes are needed for the Cake Stall and volunteers are still required for most of the stalls if you could fill in the gaps on the rotas where possible.

The school will be open after hours on Friday for the setting up of stalls (including Santa’s Grotto for which we still need a couple of elves! And can anyone remember where the fairy lights are kept?) and from 1pm on the Saturday if you could make sure you are all in place ready for Father Christmas’ arrival! No one wants to miss that!

All children are to bring in an orange (a Satsuma or similar is not a suitable replacement) by Monday and any volunteers to help make up the Christingles would be welcomed throughout all classes.

Your children have been sent home today with a cardboard candle and if this could be filled with any coins you can spare and sent into school before Wednesday please.

Parents are needed to help with the candles on the day (fire prevention!) and to get children safely to and from the church.

Nativity (to be performed by Year 1)

All costumes are to be named and in school by Monday ready for rehearsals. Tickets are available from the school office in person only please.

As a final celebration of the season we have decided to have a Book Day on the last Friday so please send your child in dressed as a character from A Christmas Carol.

(Really!! Is it any wonder I ended up feeling like him?)

Now, I do realise that there will be those among you who are now shrugging your shoulders and wondering what the problem is because you could deal with this in your sleep and I can tell you that you are the parents that used to scare me silly during this time in my life.

I remember nearly staggering beneath the weight of all this extra stuff and after drying my tears and telling myself firmly to get a grip I gamely set off with yet another ‘to do’ list as if on some festive treasure hunt.

Youngest child was at this stage!

My oldest child (the only one at school then) was to be an angel (of course :-)) and along with the sewing and tinsel edging I can recall doing battle with a couple of coat-hangers as I tried, unsuccessfully, to make them into wings without any welding equipment to hand. I would include a photo of my angel here but she occasionally reads these offerings and I’m sure would not appreciate her wonky halo being on such display. 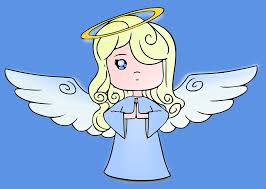 If this were a brunette it would be perfect 😉

I realise this post reveals so many of my inadequacies and am pleased to say these days are now well behind me and I cope much better with it all mostly because I ignore everything until the last possible minute. This is very easy to do when a) you don’t watch television so have not seen any of the Christmas adverts, and b) you don’t go shopping and so avoid the hell of the high street.

With less than two weeks to go however I do realise that something has to be done now particularly because my angel came to the house this morning with her brand new fiancé 🙂 and while I was out they put up the decorations as a surprise, because she knows what I’m like and because as I said before she is an angel (thank you xx)

Sorry, but this was too cute not to include!

So there will be a little organisation over this weekend, a bit of online ordering and a couple of visits out to the shops over the next week or so. But I’m keeping it chilled, I like this new relaxed approach so long may that continue and of course if it doesn’t there is always the mulled wine to reach for…

It’s far too early of course but in case we don’t see each other again I wish you all the best for a very Happy Christmas, a Healthy New Year and a fabulously successful 2016!!

…and don’t forget, every time this is shared an angel gets their wings 😉