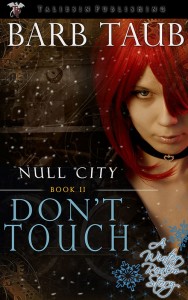 Until now I had viewed the Null City books from a bit of a distance thinking that I don’t really do fantasy, let along urban fantasy – whatever that may mean – and I’m certainly not YA so these can’t be for me. Right? Wrong…how wrong could I be? I was hooked from the moment I read this:-

‘Hope flares each morning in the tiny flash of a second before Lette touches that first thing. And destroys it.’

Lette (short for Roulette, fabulous name!) is our heroine here and she has a pretty tough time from the moment she hits 13 and inherits the family ‘gift’ where whatever she touches each day changes form. Some days this is great, diamond rings and opals appear alongside cup cakes for example, on other days life becomes precarious when her touch causes things to levitate or explode. Lette learns to cope. She wears vinyl gloves all the time to protect others and isolates herself to live alone. Stefan arrives in her life one day encouraging her to come with him to Null City where they can live a normal life. Stefan, you see, has his own family legacy he is trying to escape from and for a brief time Lette is able to experience the blossoming of a romance. The ‘cure’ of Null City doesn’t go to plan for Lette and she has to move on making another contact with Rag, an ex-angel with boundary issues, along the way.

I can’t begin to tell you how entertaining this book is. I’ve loved Taub’s writing on her blog for a while now, it’s perceptive and witty and this book is no different. A strong, beautiful heroine (who doesn’t see herself as that) with a superpower that is both humorous and heart-breaking, an original story, handsome hero’s with their own tragic pasts, a hopeful but ultimately doomed romance and plenty of action…oh and there’s an evil cat, George, …what more could you want in a book!

You can get it here:-