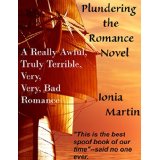 Plundering the Romance Novel, very honestly subtitled – A really awful, truly terrible, very, very, bad romance – is a delight to read, enjoy, and being a parody take none too seriously. Check out the catchy quote on the cover too – excellent!

Our hero, Stormy Raven Steel Vanderbilt Von Devreaux, Captain V.D. for short, is taken aback when the (obviously stunningly beautiful) woman aboard his pirate ship is not behaving as he expected from all he had read in the romance heroine handbook. Rather than being aloof and appearing not to be interested in him she is actually flirting and denying him his conquest…and that is just the start.

This is a joyful read full of pointless exposition and inconsistencies aplenty that will have you chuckling along one minute and nodding wryly another as Martin astutely exposes every romantic cliché there is. Here’s a snippet…

‘”My eyes!” he wailed, “my beautiful eyes of some unidentified and yet sexy colour that drives women mad with desire! They shall never recover!”

The old man wrapped himself in a bed linen that was conveniently placed nearby and surveyed his unusual guest. “I see you have returned by boy. I don’t blame you.”

Captain V.D. raised his eyebrows. “Sir, she is a woman. This is your daughter that I have returned. For this kind act of mercy, I expect you shall reward me handsomely,“ he demanded, with a glint of whatever causes glints in his eye.’

Whichever bit I chose can’t do justice to the humour that runs throughout this short and entertaining book that I really enjoyed. Chapters 4-6 and 11-12 are inspired and after the epilogue you of course get a peek at the sequel which is of course completely different from this book.

To find out much, much more click on a link….