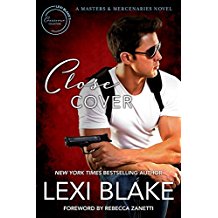 In a bid to read more in what seems to be my genre, romantic suspense, Close Cover by Lexi Blake was my next choice after reading Holy Island by L J Ross which I reviewed here, and it shows just how broad the romantic suspense genre is as it’s completely different to Holy Island. Again it was one I picked from the top of the charts.

This is a novel from the Masters and Mercenaries series (which is a huge one to get into!) and is a crossover novel where authors combine the worlds they have created with those of another author which sounds like a fascinating opportunity for letting the imagination run wild.

Remy Guidry works for McKay-Taggart doing whatever they pay him for and he’s made a solid group of friends there with Declan, Riley, Shane and Wade and I enjoyed their banter.

This is due to be Remy’s final job for McKay-Taggart before he’s due to return to Papillon to buy back the family bar.

The problem is that Lisa and Remy have fancied each other from afar for a long time but after Lisa approached Remy months before and was rejected by him, for perfectly valid, and honourable, reasons, things get off to a sticky start. What follows is a series of misunderstandings and problems caused by the usual lack of communication that happens in relationships.

The sex is definitely not behind closed doors and although some may consider it a little close to erotica when it does happen it doesn’t dominate the book.

Although this was fine to read as a standalone I did feel a little like I’d walked into a party where everyone already knew each other. Settings and characters were already well established and would probably be familiar to regular readers of Blake’s.

This was an enjoyable, easy read with plenty of other books to sink your teeth into if one book is not enough for you.