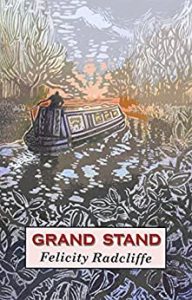 Grand Stand is the final part in the Grand Union Series – Union Clues was reviewed here and Broken Lock here.

There are several threads to pick up and run with through this book. Trying to remember where each of the characters was the last time I met them was tricky as that was a while ago now but there were enough hints to bring me up to speed.

I very much liked the tale of how Lanh came to the UK and her fortuitous meeting with Louise. This brought DI Dawn Burrows back into the story. Although she was actually already busy with Nathan who wanted to confess all about wanting to put the frighteners on Alex Pitulski. Only he thought things had gone too far and his contacts, Sebastian and Giles, had killed him, until he found out they hadn’t… with me so far?

Alex has an ex-wife, Stella, and ex-partner, Jennifer, and surprisingly they become quite friendly. The third woman in the trio being Nathan’s sister, Nancy, a rock goddess called The Baroness.

Actually, I’ll stop trying to give some sort of precis of what happens in this story, suffice to say it is plenty.

Radcliffe has a chatty, breaking the fourth wall style, with each of her characters speaking to the reader to bring them up to date with their part in the story.

If you like detailed characters and complex storylines being gradually pulled together like the drawstring of a mesh bag, then this series is for you. Plus, there are canals, of course, the setting for much but not all the action, which serve to give these books an interesting twist.