#TuesdayBookBlog #bookreview for Harry Potter and the Cursed Child – Parts One and Two: The Official Playscript of the Original West End Production 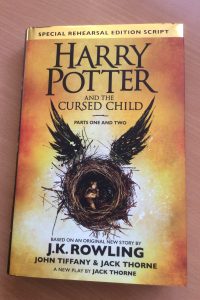 Ok, so this book doesn’t really need any more reviews but I said I would leave one for every book I read, so this has to be done.

I borrowed this book from my daughter but it was only on my second attempt that I managed to get into it. I have no idea why, just the place I was in at the time I suppose. Although it might also be that it is a screenplay which I didn’t find drew me in in quite the same way.

The book description literally says ‘The Eighth Story. Nineteen years later.’ Imagine just being able to have that on the back of your latest release.

I was always mighty envious of Hermione’s time-turner in the Harry Potter series – just imagine the things you could accomplish in a day with one of those things! And it is one of these since-banned items that features large in this story.

Albus Potter and Scorpius Malfoy are both outsiders due to parental issues, of different forms, and become firm friends at Hogwarts. It always amazes me how fate hangs by such fragile threads and consequently when these two set off to right a wrong it is interesting to see the knock on effects of what seemingly minor changes to history can do. I greatly enjoyed seeing how our favourite characters lives panned out with these changes.

The story takes on a sinister turn which came as much of a surprise to me as it did to the characters themselves and I liked the reminders of all the old spells and potions. I’m sure any Harry Potter fan will already have bought and devoured this. I enjoyed the read but wasn’t as drawn into the world as with the novels probably because this is written so differently. I would also love to get to see it on the stage although there appears to be little chance of getting tickets any time soon.

6 Responses to #TuesdayBookBlog #bookreview for Harry Potter and the Cursed Child – Parts One and Two: The Official Playscript of the Original West End Production