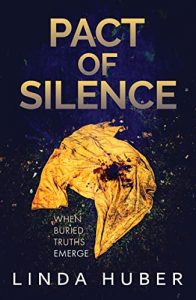 I really liked the premise for Pact of Silence. Emma Carter is taken aback when her husband comes home to their flat in York and tells her they have to swap homes with his parents, Marie and Euan, who live in the village of Ralton Bridge. Initially it seems like it is all to do with his father’s poor health but once the move is made Emma’s suspicions are raised by the way Luke’s old school friends behave towards him and how odd all his family are with anything to do with the garden. Then, when digging a new vegetable patch, she uncovers a mysterious package.

Eventually it’s revealed that a Pact of Silence was made by several villagers many years before because of the outcome of one night. A night which has affected the lives of all those involved ever since. And it doesn’t prevent more tragedy coming to the village now either.

(Note there is historical child abuse in this story which may be triggering to some.)

While Emma is hoping to settle in the village with a view to bringing up her family there, Huber does a good job of spreading enough suspicion around to keep the reader guessing and prevent the truth coming to light until the end. Recommended to those who like twists and turns in their reads.