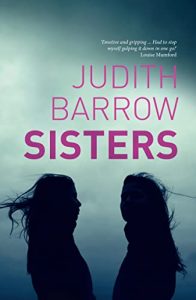 Judith Barrow is a writer whose work I snap up the moment it is released and Sisters is no exception. I received an advance reader copy from the publishers, which does not alter my review in anyway, and I will also buy my own copy once it’s released.

The story starts in 1970 when Mandy takes her younger brother, Robert, out for a walk in his pram. Her older sister, Angie, soon joins her and wants to take over but she has an ulterior motive for her sudden interest in the baby.

I won’t give any spoilers suffice to say that something truly, truly terrible happens and that changes both girls lives forever. The rest of this story shows the impact this incident has on Mandy and Angie but also on the rest of the family and community around them.

Barrow makes you feel great emotion with her writing and I have to say the beginning of the book is tough, because of what happened but also because I really hate injustice and I felt there was a lot of that in the way Mandy was treated.

The writing is beautiful, the characterisations spot on and the details of the lives of Mandy and Angie captured so perfectly you can imagine yourself next to them it is all so real. I really enjoyed the development of each character as their lives progressed and the ending is most satisfying.

Sisters is a gritty but wonderfully told tale and I don’t hesitate in recommending it to everyone who enjoys a well-written story that draws you into the lives of its characters.