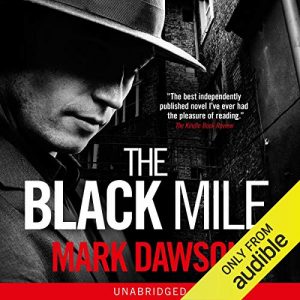 I’ve been following Mark Dawson for quite some time (no, not in that way…) by listening to The Self Publishing Show podcast he does with James Blatch, signing up for the Ads for Authors course (which I’m still trying to complete) and being on his newsletter. When I signed up to that I received a starter library of books, which was very generous of him, and I thought it was about time I got round to reading one of them. I think the ebook is exclusive to a newsletter sign up as only the paperback and audio book are still available on Amazon.

As anyone who visits this blog will know I read across all genres, particularly since I started writing, as I like to see what else is out there. All I ask for is a good story, well told, and some decent writing. I can’t remember when I last read a police procedural.

The Black Mile is the story of a family of policemen in the Met; the father, William Murphy, newly promoted to Chief Constable, and his sons; war hero, Frank Murphy and his younger brother, Charlie, who’s struggling to find his place in the force. And of a reporter for The Star, Henry Drake. It is set in 1940 and as bombs rain down on London, a killer strikes fear into the black mile of Soho as young women, all prostitutes, are murdered and, as the body count mounts, he is dubbed the Black-Out Ripper.

This is a dark and gritty novel which, as well as hunting down a killer, explores the relationships between brothers and work colleagues as different career paths are taken and loyalties tested.

I thought the characterisations were excellent, could almost taste the filth of the streets in the descriptions and enjoyed the pace as it never let up. It also ends satisfactorily whilst leaving plenty for the ongoing series.

Would I read one of Dawson’s books again? Absolutely. I can see why they’re so popular and I highly recommend this one to anyone who enjoys a darker tale.