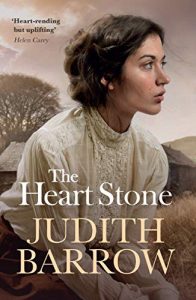 Arthur and Jessie’s first day trip to the seaside is momentous for two reasons. Firstly, because Jessie realises her feelings have deepened to love towards Arthur, someone she’s only ever considered a friend before. Secondly, because as they return home the announcement is made that Britain is at war.

It is 1914 and Jessie and Arthur are sixteen. She is the baker’s daughter and just as she realises she is in love with Arthur, and he with her, he lies about his age and signs up, because everyone says it will all be over by Christmas.

Jessie is left with a widowed mother, who, worried she won’t be able to cope takes the terrible decision to marry a man she hopes will look after her. Nothing could be further from the truth and Jessie is left trying to support those she loves from the brutality the war has brought to their lives.

Judith Barrow, an excellent story teller, has always conveyed a superb sense of place and time in her writing and The Heart Stone is no exception. This is a gritty family saga that takes a long hard look at the lives of the women left behind and is filled with well-developed characters that you’ll like or loathe. Highly recommended for everyone who enjoys superb writing and who loves a well-researched story they won’t want to put down.