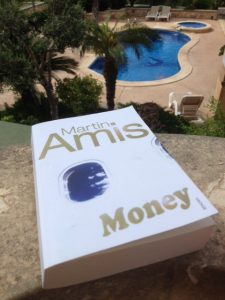 I have had Money on my to-be-read list for a long time. I started it back in the winter but then stopped, not wanting to read such excellent writing in dribs and drabs. Instead I saved it for my holiday so I could fully luxuriate in the words and savour the read.

The story is told by John Self and, as we are told in the blurb, ‘this is a tale of life lived without restraint.’ It is also a suicide note, which is an interesting start.

Set in the eighties Self tells of his life of indulgence as he jets between London and New York doing film business with his moneyman and friend, Fielding Goodney. Self has a voracious appetite for booze, cigarettes, pills, pornography and junk food. But, as he lives his life of excess, consuming vast quantities of all of these he doesn’t pay close enough attention to the stuff that matters and it is this that leads eventually to his undoing.

Then there are the women, and I thought Self showed just how lacking in confidence he was as he tried to hang on to Selina. He’s bemused by Martina who gave him books to read and then there is Georgina, who I couldn’t help feeling more than a little sorry for given the way Self speaks about the future of their relationship.

John Self is not a nice person but he is a highly entertaining character and this book is darkly comedic which had me laughing out loud in places. The writing is sharply observational, witty and clever, though be warned if you are of a sensitive nature as it is offensive in places, although the racism and sexism it contains is not unusual for the period in which it is set.

Not necessarily an easy read (but who wants those all the time) this is one that I know I will get more from when I reread it, which I’ll definitely be doing along with choosing more of this author’s work in the future. Brilliant!