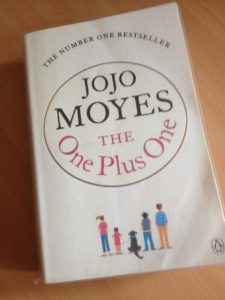 I borrowed this book from our mobile library and thought I’d share my thoughts on it here as it is the first book by Jojo Moyes I’ve read.

Jess Thomas is the main character and is the single mother of Nicky, an eyeline wearing teenager who loves his Nintendo, and Tanzie, a mathematical genius. Jess works two jobs as she struggles to pay the bills and she receives no financial help from her ex who has his own problems. By day she cleans at a holiday park and by night tends the bar in a local pub.

Via her cleaning job she meets Ed Nicholls who has his own company designing software. He’s made a terrible error of judgement and to keep out of the way has moved onto the holiday park. He makes a bad first impression on Jess but when Tanzie is offered the opportunity of a lifetime, in a maths competition all the way up in Aberdeen, it is Ed who agrees to drive them there, along with Norman, their massive dog.

Ed did not anticipate having to make the journey at only 40 mph, otherwise Tanzie would be sick, or quite how much more chaos being on the road with this family would bring into his life, especially as Jess is less than friendly, to begin with.

However, this is a romance and eventually our leading couple fall for each other. But Jess has made her own mistake and when Ed finds out about that everything changes.

This is a long book and steadily paced throughout. It is quite a task to fill such a slow journey taking several days with enough to keep the readers interest and for the most part I thought Moyes did a good job. I have to admit there was a point when I was just starting to think that this trip was never going to end when it did. Amid more chaos.

There were many events during the story that did not go according to plan for the characters plus other things that fell beautifully, if sometimes rather fortuitously, into place. Overall though the characters were great and I thought about them and the story when I was not reading, which is always a good sign. I enjoyed this read, and I think anyone who is a fan of good storytelling will too. Highly recommended.