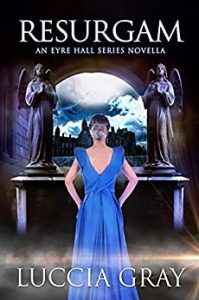 This was a pleasant afternoon read while on my sunbed recently. Having read the original trilogy I was intrigued to read that Gray had expanded the series to six books and this novella can be read as a standalone or as a prequel to The Eyre Hall series.

Jane is married to Mr Rochester, and they have a son, John. Sadly, Jane has suffered miscarriages since and is struggling with her health because of this. She is also having nightmares where Helen Burns, her best friend from the Lowood Institution for Orphans who died in her arms, comes to her asking her to save them all. Jane doesn’t understand the message until one night when another friend from Lowood, Mary Anne Wilson, arrives with bad news.

As always with Gray’s books the writing is strong as are the characters with Mr Rochester being a particularly complex one. He seems to care so deeply for Jane yet also manages to be manipulative and selfish, unable to bear her having any interest, including children, that might take her away from him and her duty to him.

Anyway, suffice to say this is an enjoyable and intriguing read which introduces a character who factors heavily in the following series. You don’t have to love or hate the original Jane Eyre to enjoy this series, just give it a go. This is a fine place to start.