I missed a week!! How did I do that? I would have bet big money on having kept a perfect record so it just goes to show how all over the place I am. I’ll give you another little taster of just how crazy I am becoming too…

I don’t know about you but I am absolutely rubbish at remembering the storylines of books – unless they are in my ‘exceptional’ category of books – and don’t even get me started on characters! This week though I reached an all time low. Having to fill in some information about one of my own books (admittedly quite detailed stuff, but that’s still no excuse) I actually had to go and get a copy of it, to find out what happened in it (yup, reread that, because this is for one that I had written myself and spent hundreds of hours on). Am I going mad? Is something I ask myself on a daily basis. I’m hoping all this nonsense is just a by-product of the menopause and not early onset dementia but I guess time will tell on that one.

For now though… onward…

I have at long last managed to set up, and run, a successful Facebook Ad! Hurrah!! Admittedly it is for my giveaway so it’s a pretty easy sell but I did manage to do it all myself (with the help of Mark Dawson’s free SPF videos – thank you!) and I am getting results so that’s a big step forward.

If you still want to enter there’s a fabulous prize (even though I do say so myself) to win and you can find out more here. 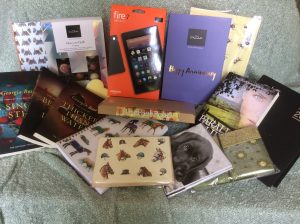 Following Bryan Cohen’s webinar I listened to a couple of weeks ago I have invested in getting my book descriptions rewritten. They are the hardest thing to write and mine were, well, no one actually said it, but more than a bit lame. Bryan and his team know what they are doing, I am reliably informed, so without further ado I introduce you to the new blurb for A Single Step: 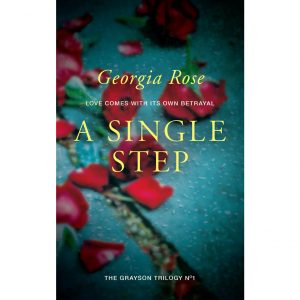 A woman wracked with grief. A man with a troubled past. Will trust build a bridge between them or will it be destroyed by dark secrets?

Shattered by her daughter’s death and tormented by her husband’s infidelity, Emma Grayson seeks refuge in solitude. As she slowly re-enters the real world, she takes on work at the sprawling Melton Estate’s stables. Initially distracted by her painful healing process, she realizes that the property’s handsome manager carries his own sadness…

When Emma is thrown from her horse and badly injured, Trent provides tender, selfless care. She doesn’t want to appear ungrateful for the lonely ex-RAF man’s support, but her anxiety keeps her silent. After his secretive past surfaces and events take a dramatic turn at the estate, she can’t help but feel violently unsaddled all over again.

Will Emma ever find inner peace and love again, or is she destined to live with only heartache and pain?

A Single Step is the first book in the Grayson Trilogy, a dark romantic suspense series. If you like wounded characters, slow-building romance, and page-turning twists, then you’ll love Georgia Rose’s powerful novel.

A little more punchy, don’t you think? Let’s hope so. The others will be following on.

There is a little news on the audiobook front too. Parallel Lies will be the first one done, and hopefully fairly soon too. It’s a bit of an experiment for us all and I thought I’d start with that one so at least if there’s no ROI then I can leave it there. I shall be letting you know more on the progress of this in due course.

You know the more I think about it the more I think I did write a post last week. I’m thinking I simply forgot to save and then post it. Is that worse or better than just forgetting to do it at all?

Anyway It’s been a distracting week on the family life front, and you know, some things are just so much more important than word counts and other such nonsense so I’ve done a bit, but not much.

Have a terrific week everyone xx