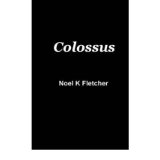 Colossus is the second book that I’ve read by this author and what I like about his work is the sheer scale of it. At 638 pages it is not a short read but it’s totally worth the investment of time. But it’s not only that but the fact that Fletcher’s storylines have a James Bond epic feel to them.

He has the big set pieces but there’s also an additional quality as we see the detailed and careful build up, from those blackmailed into playing their part, to those killed to prevent the truth getting out. The threads are gradually brought together until all the pieces fit and you can see the whole.

The spectacle at the centre of this story is the airship Colossus. It is on its maiden voyage taking in all the major capital cities on its inaugural flight but unknown to those on board there are others with a more sinister plan and the Colossus is just the right vehicle to deliver it.

In today’s world, filled as it is with terrorist atrocities every day I thought I knew where this plot was headed but I’d forgotten one of the carefully laid threads from earlier so for me it delivered a twist with a potentially far more devastating outcome.

Unlike the Bond storylines though it doesn’t take just one person to foil the plot (if indeed it is foiled? No spoilers here!) and although we have an agent in the form of Tom Ravencroft and his new recruited sidekick Rebecca ‘Becky’ Davis it takes the input of many to attempt to prevent a totally catastrophic event.

Well-paced throughout Fletchers RAF background is obvious in his knowledge of all things military. Although this information is precise and detailed it adds an authenticity to this novel which would be enjoyed by all those who love action adventure reads with an intriguing plot and well-written script.

For those who want to find out more, here are the links…