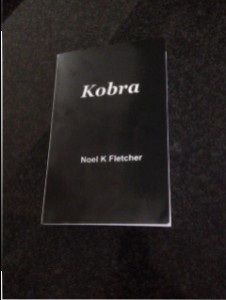 I picked Kobra up at a local writer’s event in the summer and added it to the piles of paperbacks I am still yet to get to. However one day I took a quick peek at the prologue and was hooked. Here is a snippet…

‘Cresting the hill, the two boys stood panting. Beads of perspiration forming on their dusty faces, their socks rumpled in untidy heaps above scraped, unpolished boots that had seen better days.’

Set in WWII the Nazi forces are in retreat and Hitler has ordered the immediate deployment of the Luftwaffe’s hi-tech airborne weapon system – Kobra. Treading carefully so as to give nothing away I can tell you that people are murdered for what they have seen and a field agent’s radio message is suddenly terminated after he makes a terrifying discovery at a secret underground factory in Bavaria.

Churchill orders the threat to be neutralised and Sarah Porter a ferry pilot, and John Messenger, a wounded fighter pilot are thrust together in what amounts to a suicide mission.

What comes across most strongly in this book is that this author knows what he is talking about. No detail was glossed over through lack of knowledge, though if you’re not that interested in the intricacies of flying the detail is not enough to slow you down.

What I found very interesting, in these days of, it seems, having to be thrown into the action because apparently the attention of readers can only be held by ‘stuff’ happening, is that there is a long build up to the main thrilling part of the mission, and it works very well. I like knowing what has brought the characters to this point. 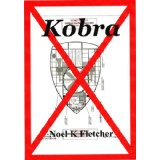 Fletcher builds terrific characters here and not just the main ones, Sarah Porter and John Messenger, but great attention is given to all the bit parts as well. So much so that I could visualise this perfectly played out as one of those glorious black and white war films – all neatly trimmed moustaches above stiff upper lips and clipped English tones. Wonderful.

I particularly liked the section where Sarah and John are brought together for their training. Both are strong and work well off each other. I also liked all the attention given to the lives of the resistance fighters they had to link up with and the agents working in danger of discovery at any moment. Thrilling stuff!

As some may suspect I like a lot of action and adventure with my romance and although that is not the focus of this book it is there bubbling under the surface. However something happens and in these days where with very few clicks on the keyboard it is possible to stalk track someone down on the internet very quickly it makes you realise how easy it was back then to lose contact and have no way of finding out what happened to someone. And that is all I’m going to give you on how this story pans out however if you like well written solid characters and a terrific storyline then I would highly recommend Kobra.