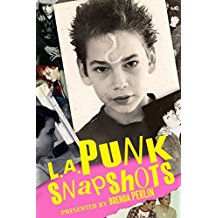 I liked the format for this book. It is photo and illustration heavy, each picture alternating with a short paragraph, or two, about the punk music scene during the 1980’s. Many are written by Perlin herself but there are also several from friends as well as quotes from some members of the bands themselves.

It would be difficult for today’s youngsters to imagine a time when we didn’t all carry a camera with us wherever we go. They won’t appreciate this authors efforts when as a sixteen-year-old she became a punk rocker and, preferring to be behind the lens, spent her time recording the people and bands she saw. There was no taking many shots until you got the perfect one or being able to view them there and then and delete the ones that didn’t work. You wouldn’t know what you had got until they were developed. There was no digital uploading then either and no saving your photos securely in a cloud. This collection has been kept safe in a box for over thirty years, and cherished, which shows how important they were to this author.

This book is an interesting collection which even if you were not involved in that scene brings many reminders of the way people looked and dressed then. It is made more personal by the addition of so many insights from people around at the time and would be enjoyed by anyone who grew up in the 1980’s or who is interested in music history.