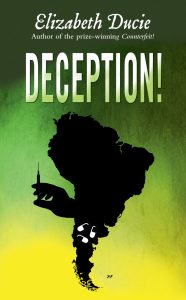 I rarely read an author’s books one after the other but having finished Counterfeit (which I reviewed here) I was keen to get on with Elizabeth Ducie’s new release, Deception.

Suzanne and Charlie have now set themselves up as investigative consultants and take on a new client, Damien, who is concerned about the aggressive behaviour some athletes are exhibiting. Their only apparent link is that they are all drinking a super new health drink.

The investigation into the health drink, and the man behind it, takes Suzanne and Charlie to Brazil where they also have the chance to continue to look into a character from Counterfeit. I won’t say more on that for fear of giving spoilers to the first book.

The settings and pharmaceutical knowledge (which is not that intrusive in the story) feels as authentically solid and knowledgeable as in the first book. There are new characters to meet, both good and bad, although as I’ve found with Ducie’s work it’s not always easy to tell one from the other until the mystery unfolds and people reveal their true selves.

The chapters in this story were interspersed with the back story of one of the characters and I really liked this filling in of the background. This story is all tied up quite satisfactorily but I always had the feeling that deception was rife throughout this tale and that it doesn’t end at The End. And I was right because there is then an epilogue and a couple of lovely little teasers crop up in that that are enough to whet your appetite for the next in this series.

This is for all those who like well written mysteries and comes highly recommended.