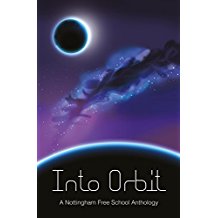 This is an anthology of stories and poetry written by pupils of Nottingham Free School as part of the ongoing Brilliant Book project. In the case of this book all the Year 8 pupils are keen to become writers or work in fields where writing is necessary.

Blue Filters by A G Pillay

Oooh, this story starts with the most deliciously dark and wonderfully described drowning told from the narrators point of view. I really enjoyed the writing throughout and it feels like a small part of a much larger tale which could develop very well.

This is part of an ongoing story and starts with Anderson who is a mad scientist currently in prison. It doesn’t take him long to escape and return to his laboratory so he can continue with his experiments. This story was non-stop action. I liked the humour, the imagination and the fact it was well-written and pacey.

Into the Darkness by AN

This is my idea of a nightmare. A driver breaks down and their phone is dead. They knock on doors for help, until one is answered. Shudder. AN does a good job of building the suspense here and the story ends just when it’s become even more creepy. Ideal for expanding on I think.

This is a most excellent story about the horrors of that first day at a new school, new teachers, bullies, not knowing where you are going and imagine all this exacerbated by having a ridiculous name that singles you out for being picked on. I really felt for Stu Pid and thoroughly enjoyed this read, particularly the darker turn it took and the final outcome. Very good.

Dirt Under My Nails by DJL

A tale of loss in a time of war this one is pretty sobering, particularly the thoughtful ending, which is excellent and sadly so very true.

I found myself salivating as I started reading this. It was all marshmallows and chocolatey deliciousness but it ended as some sort of apocalyptic nightmare with many questions and so many answers needed.

The Wandering Forest by JP

This was a wonderfully descriptive story of fantasy, parallel realms, portals and double lives. I always get confused in tales such as this but I really liked those little repetitions the author put in of the different characters going through the same actions or seeing the same views.

James and his brother, Christopher, have clearly had adventures before but in this one they seek to track down Shadowman, via a portal. Having found him they arm themselves and go to kill him but right at the crucial moment he morphs into something no one was expecting. I particularly enjoyed the chatty start to this one as I too am a fan of ham and pineapple pizza!

Dead by Daylight by NM

The narrator of this story is living one of those horror dreams where you are being chased by something unpleasant. In this case it is by The Hunter, and he has an axe. Gory and frightening this is the sort of thing not to read last thing at night!

This is a very well-written story about Autumn, an eleven-year-old, on her way to school. She meets some bullies who, well, I don’t want to give any spoilers but things go bad and Autumn ends up in a place she doesn’t want to be. She meets all sorts of things and deals with various situations, and then… well you will just have to read what happens next for yourselves.

The Orphic by Molly Dickinson

This was a great pacey story and very well written. The narrator knows something is coming and when the school is put on lockdown she knows it has arrived. What will it take to save the school and everyone in it? Good job!

This starts off as a happy, chatty tale with the narrator, Ella, telling you all about herself but you know by the end of the first section that something has gone very wrong in her life. It was a well written story that, because of what happened in it, I would have loved it to have been much longer.

A Medieval Tale by Wojciech Milarski

The protagonist of this story is keen to improve his fortunes so sets off on an adventure. He meets Sophia who is much more than she initially appears to be and they journey on together. This tale was a little rushed, particularly the ending, but I enjoyed the read.

There are then some terrific Haiku; three from Jasmine Johal, and one from Haleema Ahmed. These are followed by a wonderful piece of Blitz Poetry from Jasmine Johal and two highly enjoyable poems from Alexander Pidluznyj.