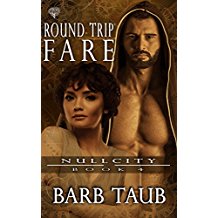 Writers of fiction make up worlds, I know I do, but mine are tame, only stretching as far as fictional villages set in the recognisable British countryside. Others, particularly fantasy writers, really make up worlds and Barb Taub is one of those. Here is my review of the fourth book in her Null City series, Round Trip Fare.

I’m just going to say at the outset here that I loved Carey, what a strong woman! She’s resourceful, skilled, totally prepared and the star of the show for me. She’s fiercely independent, hugely accomplished in being a harmonia warrior and sassy with it. There were other terrific characters in this strong cast as well, and writing this sometime after finishing reading the book Harry and Marley spring to mind and I really enjoyed Iax, or Yosh.

Carey also has a twin, Connor, and they get separated for a while. The future for one appearing to have taken a darker turn much to the dismay of the other.

There is terrible tragedy in Round Trip Fare which Taub really makes you feel. I’d like to mention one particular moment but at the risk of a spoiler had better not. Oh, and there’s plenty of killing throughout, of course.

What I particularly enjoyed through this book though was the progression of Carey. She has learnt her warfare strategy craft well and works alone preferring it that way at the start of the story. But by the end she has her own small army which is filled with an assortment of characters displaying a variety of skills. She realises she needs to work with others to accomplish the tasks she has in front of her.

There are many traps and betrayals throughout this story with much bloodshed and plenty of action but this talented author still manages to squeeze in a little frisky romance, or two.

Not all the tasks are completed by the end of the book either but there is no cliff hanger (thank goodness!) this part of the ongoing story finishing perfectly and I’m looking forward to the next part which I’m hoping is coming soon.