My current obsession… and the best TV drama series EVER! #MondayBlogs 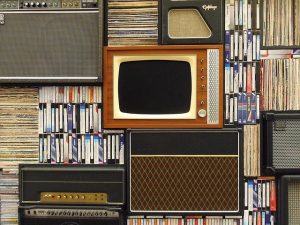 Image by Free-Photos from Pixabay

I don’t watch much television, maybe an hour a day, late at night when I finally finish at my desk and want to wind down before bed. I also try to watch a film at a weekend. Not always successfully.

Generally, we record many different series and end up watching them months and months, if not years, after everyone else is talking about them.

There are a few that have fully engaged me over the years. Line of Duty and Game of Thrones immediately spring to mind. There must have been others.

However, there is one series that I have loved ever since I saw it for the first time way back in the 90’s. At that time, I had young children and a full time job and there was just one episode shown a week. Can you even imagine that now in a world where everything is streamed and you can watch a whole series in a couple of days, should you want to?

The series in question is ER (Emergency Room) and if you haven’t seen it it’s a medical drama set in the emergency room (A&E in the UK) of the fictional County General Hospital in Chicago. It is busy and bloody and chaotic, and I love it! 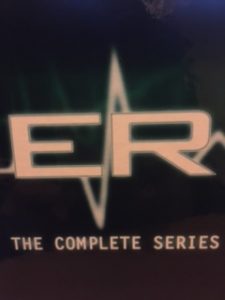 In those days I made sure I was ready to watch each weekly episode as although we had the ability to record stuff it was a little haphazard. Taping had to be done onto VHS cassettes and these were not reliable. The recordings were frequently of poor quality, occasionally getting chewed up in the machine, and the player had to be handled just right to even manage to get it to accept a tape and play it. As I didn’t want to risk a recording mishap I preferred to watch live, whenever possible. This was the first time I watched the series through.

The second time was after we had a major upgrade in recording ability which I think was around 2010. Anyway, the series was recorded and I watched them far more frequently than one a week! I loved the storylines, the drama unfolding in the emergency room in each episode but also the background lives of the doctors and nurses as they progressed through the series. I loved the attention to detail in the writing, the character arcs and the care maintained through fifteen series which set the tone (if you know, you know) for this beautiful series.

Anyway, scroll forward to the present day and guess what? I was bought the complete box set of ER for Christmas by my wonderful son and his girlfriend – yay! All fifteen series of it. All 331 episodes. All 93 discs. 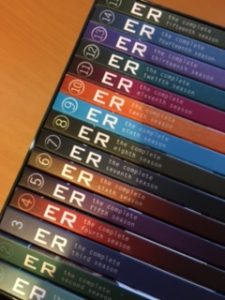 It’s been long enough since the last watch through that most of the detail has been forgotten (you know what my memory is like!) so I’m almost coming at this fresh and it’s as good as ever, if not better. I’m trying to limit myself, I really am, but it’s difficult when Greene, Ross, Lewis, Carter, Hathaway and Benton are oh so close and ready to entertain me. It really is a case of just one more… but how will that get the writing done? 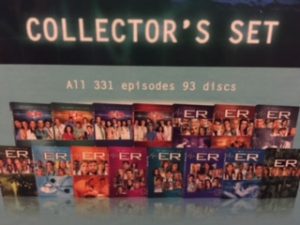 How about you? Is there any series that has completely captured your attention so that you want to watch it again, and again? Do let me know any of your TV obsessions as they might remind me of other series I’ve enjoyed.

19 Responses to My current obsession… and the best TV drama series EVER! #MondayBlogs