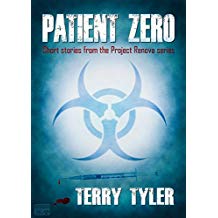 I have read the first in the Project Renovo Series, Tipping Point, and you can read my review here.

Before I move onto the others in this series I thought I’d read Patient Zero which expands on the lives of some of the smaller characters. All these stories were interesting but my favourites were:

Jared: The Spare Vial – Jared is given two vials of the vaccine that will prevent him and a friend from catching the virus. Angelina is his girlfriend and assumed recipient of the second vial, but not all is as it seems and as she makes her own bed will Jared leave her to lie in it, or not?

Flora: Princess Snowflake – ‘Daddy used to say that the best thing to do about anything nasty. Just don’t think about it.’ Flora had lived a protected life, shielded from the worst the world has to offer by doting parents but when they die, despite having had the vaccine she is all alone. You’re left really concerned by what will happen to this naïve girl.

Jeff: The Prepper – his bunker was mentioned several times in Tipping Point so it was great to find out more about that.

Karen: Atonement – this story really shows what a great understanding this author has of women, and what they can be like.

Aaron: #NewWorldProblems – Aaron is missing social media more than anything else but gets himself set up well when the virus strikes. However he can’s stop thinking about his ex, Luisa. ‘You said you’d die for me.’ She reminds him. Are those words going to come back to haunt him?

Evie: Patient Zero – where it all started…

You can find out what happens after the stories end by reading the series. You won’t be disappointed. As always Tyler’s writing is excellent and her story telling inspired. I have enjoyed everything I have read of hers and have no hesitation in recommending this one.