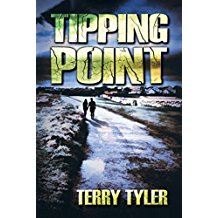 It has always shocked me how quickly a community, of whatever size, can succumb when put under pressure. How neighbour can turn on neighbour when they’d previously lived contentedly side by side, how a population can lose its humanity and atrocious deeds can be carried out in the name of peace keeping or self-preservation. Tipping Point covered all this, and more, and I thoroughly enjoyed reading how life in Shipden, and then everywhere else, unravelled.

The story is told mostly from Vicky’s point of view and I have to say that she really grated on me to begin with. Her boyfriend, Dex, was heavily involved with an underground group, Unicorn, who had whistle-blower type connections and were investigating the possibility of some sort of Armageddon like scenario. However, the self-obsessed Vicky was totally dismissive of his warnings being more concerned about the fact that he didn’t want her, or her daughter Lottie, joining the latest social media platform, Private Lives, and she was also convinced he was playing-away.

Lottie was a typical teenager, only interested in the present moment and without the same regard for life that you gain with age. One day, she and Vicky spent the day eating cheesecake and watching DVD’s as the world as they knew it was collapsing around them.

Gradually I started to soften towards Vicky, not because of her whining about Dex leaving them to cope alone but because of her naivety. Despite Dex’s warnings she had the same slow dawning that I think would come across most of us should something like this happen. Things clicking into place as small moments seem unbelievable but eventually enough of them happen to make you wake up to reality.

The rapid breakdown of society was very well covered. I have long been sceptical of online data collection, of being ‘watched’ by social media and Big Brother like surveillance. I was fascinated by the control of the media, of government manipulation over what was aired and I was so involved in the storyline at this point it came as something of a surprise to watch the news and not find some ‘reassuring’ message on there about Shipden as the equivalent of the plague struck it. Even though I knew Shipden was fictional!

Vicky eventually wakes up to the new reality, not a moment too soon, and fortunately for her and Lottie Dex has prepared an exit plan for them. They meet up with others and soon learn a new way of living. This part of the story slowed a little for me as I guess life would and it’s not long before the group start to get restless and look to move elsewhere. But they are not the only ones, and there is a particularly volatile character, Wedge, who could prove to be an interesting person for them to have to get along with. I shall be looking forward to that.

The ending leaves you with a satisfied feeling while plenty of threads remain to be continued in the next book of the series. I’d recommend this to anyone who enjoys well written character led fiction.