#Bookreview for A Gangster’s Grip by Heather Burnside @heatherbwriter 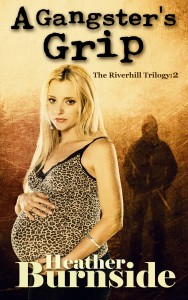 A Gangster’s Grip is the second novel by Heather Burnside, the first, Slur, is reviewed here and her book of short stories, Crime, Conflict and Consequences, here.

A Gangster’s Grip is a sequel to Slur though four years have passed and Rita (one of my favourite characters from Slur) has settled down with Yansis and is living in Greece. They come back to Manchester to sort out some personal issues and are surprised to find that Rita’s sister Jenny is going out with local bad boy, Leroy, and is heavily pregnant. There is no room for them to stay with Rita’s parents, Joan and Ged, so they go to stay with Rita’s best friend Julie, her husband Vinny and daughter Emily.

Very early in the story it is apparent to Rita that Leroy is up to no good and worried for her sister she wants to warn her off him but with her father also involved in Leroy’s shady world and her sister seeming to be besotted with the man it’s not going to be easy.

I’ll say straight away that this book gets better and better as it progresses. The start for me was a little slow, with sometimes too much description and we didn’t get to see a great deal of Leroy’s bad side until much later on. However Burnside really picks up the pace in the second half, along with the crime, violence and death.

The characters that I thought were particularly well written were Carl, who sells drugs for Leroy, and his wife, Debby. Their lives were dismal, their filthy house and desperate kids horribly realistic. Debby is hooked on heroin the supply of which Carl controls along with beating her; presumably because that is the only way he feels he has power over anything. You can sense his frustration at working for Leroy, having to work the less lucrative pitches because Leroy is getting Winston (oh and there’s a twist there which I won’t share!) to work those and Carl is also having to run around picking up drugs as well which adds to his discontent.

There’s a terrific ‘discussion’ between Leroy and Carl in which Leroy’s aggressive dog Tyson plays a part and as the book builds towards its violent end here’s a snippet.

‘Within moments of setting off, Rita realised they had acted rashly, fuelled by impulse. They should have rung Jenny and warned her, maybe rung the police. But what would they tell them? There might not be any crime to report yet. It was too late now; if they doubled back it would waste more valuable time. Besides, what if Debby was wrong? Rita hoped she was.’

There is language in this novel which might offend some but if you’ve picked up a book set in the gang culture of Manchester then that’s only to be expected. I’m looking forward to what comes next from Ms Burnside and highly recommend this to those who like a little grit in their reads.