The wonderful Saviour showed us round the farmhouse on our arrival and as part of his tour pointed out where the nearest bus stop was, with a bus coming every hour, he told us. We tried to ascertain when exactly on the hour but couldn’t manage to bottom out the answer on that. As it turned out we didn’t see a bus all week…apart from once…as you will find out later.

The lack of buses didn’t matter because last night our car arrived. They drive on the left here and it is the only place where we have driven abroad following a rather shocking experience on our honeymoon umpteen years ago when we hired a car in Corfu and promptly decided life was too short, at least it was likely ours would be if we continued in this folly. Our car is delivered by David (our car man) and his lovely family and it is small and blue (don’t ask me any more than that!)

When we drive here we stick out like the proverbial sore thumb because a) we courteously use the British-Wave as so beautifully described by Barb Taub in her post Not the way I planned it. Best Holiday Ever? And b) we indicate…

So firstly, after slathering on the sun cream because I burn like a sausage, we head off to Munxar (Munkjar) to a supermarket to stock up with delicious things like ‘proper’ tomatoes that are not all samey, like the ones here, and taste utterly yummy. And flat peaches that ooze with juiciness and taste like a little piece of heaven. 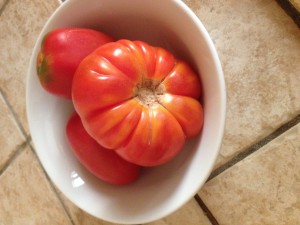 Then we take a walk along the Sanap Cliffs behind our farmhouse. This is quite a long walk and scenic. Now I should add in here that Gozo is largely rural and we are right next to a farm. There are a lot of cows (dairy) which we hear in the day but as we are country dwelling folk the occasional whiff of something rural doesn’t bother us. We do get bothered by the local wildlife a little further into the holiday but for now we are fine.

So back to the cliffs. In order to get to them we appear to have to walk through the farm. We have no idea if this is right or not as the path indicated to the cliffs at the end of the road has no further signage so we wander on. The cliff top walk is eventually reasonably obvious, being exactly as described, and every 100m or so there is a little red dot painted on a rock which we think indicates the path and anyway using common sense and keeping the sea on our right we manage to find the way 😉 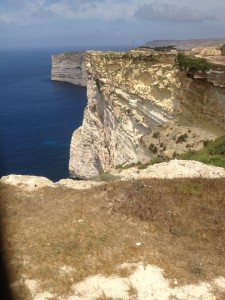 There are little bits of land all walled off as if they are tiny fields up here though no crops were obviously growing and curiously most of these patches of land had little huts (like the one below) built in the corners of them – some of them had a car seat set up in them as if watching for something. There had been a hint in an entry made in the visitors books back at our place that others had walked up here and met people who caught birds for a hobby but that is all I know. 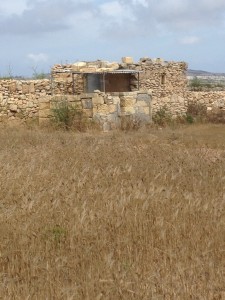 Either that or it was Drogon’s lair…one for the Game of Thrones fans there (and there is a connection, which you will find out later…)

The clip we were all waiting for…

We get back and I head for the pool, which, I have to admit is a little cool on entry…yikes! Also it is tiny, as so many are here having been squashed into small courtyards to suit the holiday market. However undeterred by the size of pool there is always a deep end here and within the space of 3 metres the depth drops to 2m. That said, it does the job and I am definitely cool in no time!

All of Gozo is built of the natural limestone that is mined here. I doubt there is a red brick on the island. The streets are a mixture of old and new which works perfectly because at the heart of it all is the same stone throughout. You can pass one gleaming new fancy and often quite ornate house immediately next to something in need of a makeover and that hasn’t seen a paintbrush for…probably…ever.

There is also something strange to us about the farmhouses we have tended to stay in. Most, but not all have been built for giants. If you were 12 feet tall you wouldn’t have to stoop in our house and huge doorways guard each room. The spare bedrooms we have this year are particularly cavernous and there is a stone stairway to the second floor that honestly wouldn’t look out of place on a Games of Thrones set.

That said there is then, incongruously, the teensiest tiniest spiral staircase up to another bedroom, housing bunk beds, and a bulging, twittering flurry of frantic nesting activity behind a grate (guaranteed to mean no sleep should that room be occupied at the moment!) and then out onto the roof terrace. There are spectacular views from here and if you peer over the edge you are met with the staring eyes of inquisitive goats. 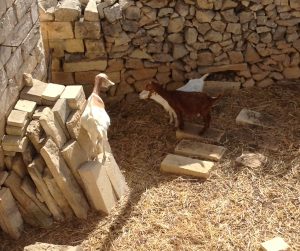 Ok so this photo wasn’t taken at that time…now they are just interested in who is about to feed them!

Last year was the first year we had holidayed sans children in more years than the both of us has fingers. We had a two bedroomed property which we thought we could get away with but the owners who showed us round were mystified that we were there on our own. When we looked in the second bedroom we found out why…and I really hope this video works for you…

We ate at The Boathouse in Xlendi (Schlendi) that evening…very nice…and I drove back which was fine until I found myself having to back pedal fast due to a bus (I told you I saw one!) coming in the opposite direction that showed no sign of stopping and the road just wasn’t big enough for the both of us. I had made a basic error of judgement on getting into the car to drive back by failing to ascertain where reverse gear was and the flurry of expletives uttered as I tried all permutations whilst the bus bore down on us alarmingly would have made a sailor blush…*she hangs her head in shame* 😉

Today I finished wonderful One Way Fare by Barb Taub and you can read my review here. I start the paperback I brought with me tomorrow and I am very excited about it!! 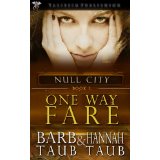