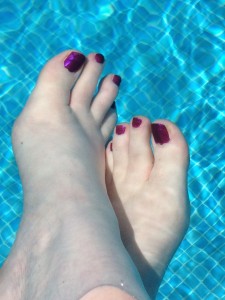 I felt the taste of sea water on my skin for the first time today. It’s been unusually windy and cloudy – the coast definitely red flagged since we got here. Gozo has several small beaches and one large one at Ramla but none of them are particularly commercialized. While the beach at Ramla is sandy, gently sloping out to sea all of the others that we have been to are rocky and ideal for snorkelling.

The waves are still big today so I didn’t expect to be getting in but rounding a curve into Qbajjar Bay (no idea on pronunciation sorry) the waters were calmed by the arms of the bay. I could also see that I could get in via steps onto a sea bed covered with rocks and ideal for fish spotting – yay! 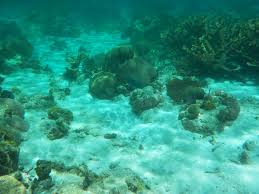 I should add here that I am afraid of the sea; its utter vastness terrifies me and the fact that it’s all linked. I know sharks (the dangerous ones) are generally elsewhere in the world but what’s to stop them going on a little exploration of their own? Just because we don’t hear about shark attacks in the med there’s always a first time and I know they’d just love to sink their gnashers into my meaty thighs.

There are also many UST’s (unidentified scary things) that live in the sea so I like to go where I can see the bottom and can see clearly what’s in there – mostly at least. On a more somber note I have found it difficult this year to look at the sea and not be able to think about the humanitarian crisis happening to all the poor people trying to cross to what they are desperately imagining is safety. Especially with the seas we have been having the last few days. 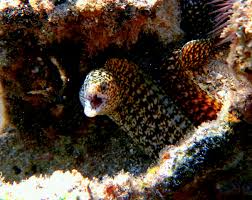 This is what I imagine a typical UST to look like!

The water is always initially cold so I lower my mask and bite down on the mouthpiece as I pushed off from the steps. The quicker the better really (you don’t want to be looking like a wuss in front of anyone looking on!) an initial sharp shock and a few rapid fire breaths to recover and I’m off, eyes peeled. For a while I see nothing other than banks of sea grass waving in the currants like fields of barley blowing in the wind. I’m concerned the rough seas have kept the fish away but then I spot a few, and I start to drift, suspended, and as still as can be.

The occasional sound of water lapping at my ears as waves break around me and my breath, deep and regular – think Dustin Hoffman in The Graduate, when he’s in that wetsuit rather than the threatening breaths of a waiting murderer. Only I’m not in a wetsuit and I can feel the changing temperature of the water on my skin all the time. Fresh cold waves wash around me but at any point of stillness the water warms immediately as the sun does its thing and I can feel its heat momentarily then another wave comes. 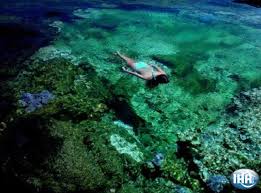 I move on slowly, scouring the sea bed but ignoring the dark shadows under rocks and amongst crevices where the UST’s hide and I watch for fish and sure enough they come. First I see them in ones and twos, a variety of shapes and sizes, pecking at rocks, seeking food, pale colours, light and dark browns, sometimes darker markings, stripes and occasionally a flash of iridescence catches my attention as something fancier crosses my path. 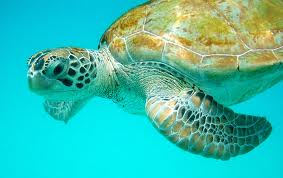 This is what I’d love to see

Then I see a shoal, a small one, identical fish seeking safety in numbers. I’ve been here before and I float as still as possible above and slowly lower my hands amongst them occasionally tested as a potential source of food. I enjoy swimming with a shoal, the sunlight filtering down through the water, fish darting to and fro, catching the light like diamonds as they pass me then I move on. 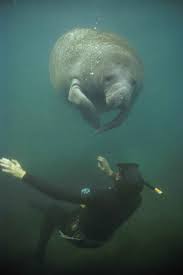 It’s time to get out and I try to do so with as much grace as I can muster. Think Ursula Andress…in that white bikini…in Dr No…got it? Yup that’s just like me 😉 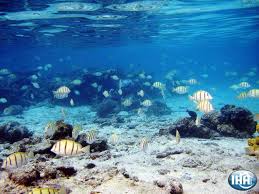 I love the feel of the salt drying in the heat of the sun on my skin after, prickling and tightening as the crystals form. My hair stands up all over the place with the crispness of salt running through it and as I dry I’m utterly relaxed and sit staring out to sea…